*You don’t want to cook the potatoes too long or else they can get starchy and therefore prevent you from getting a nice smooth cheese.

This recipe really makes you feel like you’re eating actual nacho cheese ! Having it on chips with extra pickled jalapeño slices took us right back to times spent going out to see a movie and munching on some nachos ! The cheese does have a bit of tanginess to it (thanks to the brine and lemon juice) but it doesn’t overwhelm the cheesy flavor. Between it’s creaminess and flavor, we’d love to try making a macaroni and cheese using this nacho cheese !

This recipe came from “Vegan Comfort Classics” by Lauren Toyota.

We weren’t paid in any form to promote the cookbook or Lauren Toyota. 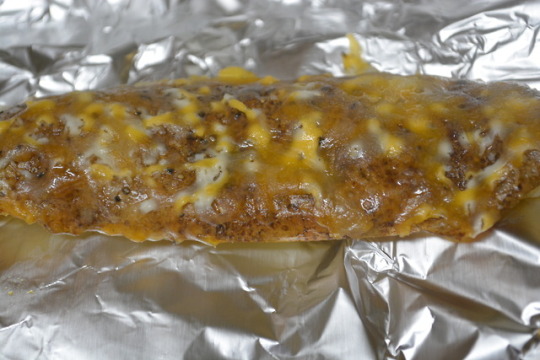 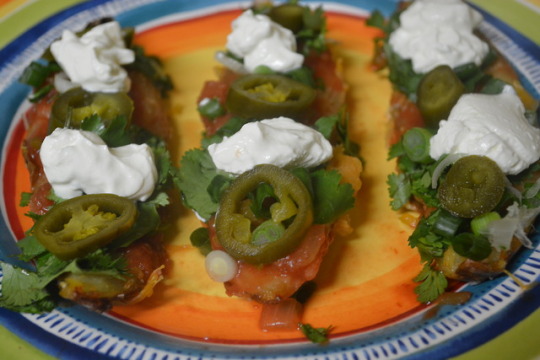 We came across a 2010 issue of Food Network magazine where they made a themed potato skin for every team in the NFL and their toppings for the Arizona Cardinals themed potato skins was just too scrumptious to pass up without trying !

*Some of our potato skins fell apart so it really is a good idea to bake an extra potato just in case something goes wrong with one of the other potatoes.

***We brushed both sides of the potato with the butter when we stuck it in the oven and it dripped down to the bottom of the oven and created so much smoke ! We had to turn on the fan over the oven and lower the window so the smoke could go somewhere. It really freaked our cat Ghost out (he even hissed at the stove at one point) so we turned the heat off after 5 minutes and just left them in there for the remaining 10 minutes.

****After the butter fiasco, we decided to take a baking sheet out and line it with aluminum foil. We put the potato skins on the lined baking sheet, skin-side up, and spread the cheese over them afterwards. We put the baking sheet in the oven for the 5 minutes (oven still turned off but had plenty of residual heat) and it came out with the cheese melted and no mess to clean up like we would have, had we put the skins directly on the oven rack.

This is such a great game day snack even with the problems we ran into ! The skins might have been crispier had we left the oven on but otherwise it was still delicious. You can pick it up with your hands to eat and the skin’s firm enough that the toppings don’t go spilling everywhere. You get some heat and acidity from the salsa and pickled jalapeño slices, a freshness to the dish from the scallions and cilantro, the sour cream adds a tanginess as well as tempers the heat from the salsa and jalapeño slices, and it’s nice having that cheese flavor come through as well in the dish.  You can really change up the flavor of this simply by changing the salsa ! If we make this again in the future, we’ll probably skip spreading the melted butter over the flesh side of the potato skin.

We weren’t paid in any way to mention Food Network, La Victoria, Pace salsa or Kraft.